House Democratic Leader Tracy Maxwell Heard (D-Columbus) and members of the Democratic caucus today marked the start of the state’s new fiscal year and the one-year anniversary of the largest General Revenue Fund budget in state history. Gov. Kasich signed the last state budget bill on June 30, 2013. At the time, House Democrats stood in opposition to the budget, saying the toxic mix of tax hikes on working and middle class Ohioans and funding cuts to schools and communities would not create the economic opportunity Kasich and his Republican colleagues promised.

Republicans used property and sales tax increases along with funding cuts to schools and communities to target tax cuts at the state’s top income earners—a policy they say helps the state’s economy. Still, Ohio’s job creation rate trails the national average, and the state ranks 38 out of 50 over the last year in job creation according to the Arizona State University W.P. Carey School of Business.

Healthcare Decisions Should Not be Placed in the Hands of Corporations

Thousands remain without work, little hope of getting ahead
Read Full Story

State Representatives Matt Lundy (D-Elyria) and Armond Budish (D-Beachwood) announced that they recently introduced legislation to establish a “Buy Local Ohio” program for Ohio’s public entities. The Buy Local Ohio program would incentivize public schools, safety services and municipalities to give preference to local and Ohio-based contractors for their projects.

“Gov. Kasich’s action on Senate bill 310 jeopardizes $6 billion in potential capital investment from an advanced sector of our economy. With one stroke of the pen, Gov. Kasich has destabilized bipartisan standards that save consumers and businesses millions on their utility bills.”—House Democratic Leader Tracy Maxwell Heard (D-Columbus)

“How hypocritical and misguided it is for Gov. Kasich to undercut an emerging sector of Ohio’s economy, especially when he led the public to believe he supported our renewable energy standards just two and-a-half years ago. His actions today will cost Ohioans more jobs and more money out of working families’ pockets.”—House Democratic Whip Michael Ashford (D-Toledo)

“Today, Ohio became the first state to take a giant step backwards in the global pursuit of efficient and cost effective advanced energy solutions. His handout to big electrical companies will be a black eye for our state for years to come. He is clearly taking us in the wrong direction.”—State Rep. Nickie J. Antonio (D-Lakewood)

“Even when faced with the overwhelming facts of how Ohio’s advanced energy standards are creating jobs, encouraging investment and saving consumers money, Gov. Kasich turns a blind eye to bipartisan solutions that have helped our state succeed. Each time Ohioans look at their growing electric bills, they can thank Gov. Kasich for putting special interests over public interests.”—State Rep. Robert F. Hagan (D-Youngstown)

“The Governor’s action on Senate bill 310 has disastrous implications for our environment and our economy. As the wor 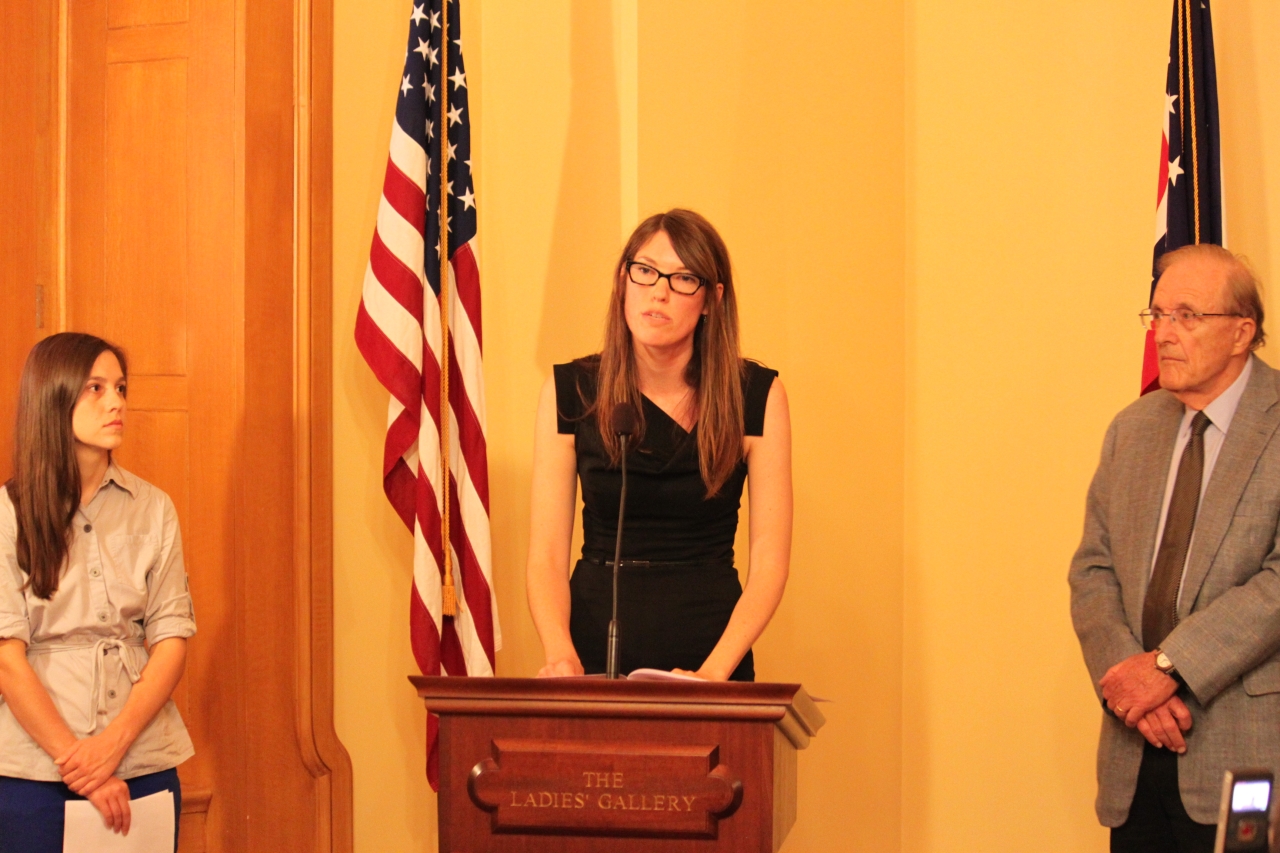 State Rep. Kathleen Clyde (D-Kent), accompanied by Dr. Grant Morrow and patient advocate Samantha Rhodes, Thursday announced the introduction of the Doctor-Patient Relationship Protection Act, which puts the emphasis in Ohio back on patient safety and protects doctors from having to choose between following the law and abiding by the ethical standards of their profession.

House Democratic lawmakers applauded today’s U.S. district court decision in which Secretary of State Husted was ordered to set hours for the final three days of voting in all counties and reverse the illegal cuts he made in February of this year.

“While it is disappointing that our GOP-controlled state government continues to put up unconstitutional roadblocks to Ohioans’ sacred right to vote, I am pleased that the federal courts have once again sided with Ohio voters.

“The court’s order to restore the last three days of early voting will ensure access to the polls for Ohio voters at a time when precincts and polling locations have been cut and consolidated.

“I remain hopeful that a day will come when all elected officials focus on improving voter participation instead of limiting it.”—House Democratic Leader Tracy Maxwell Heard (D-Columbus)

“I applaud today’s ruling as a victory for Ohio voters. But, we should remember that this is simply a temporary solution to a permanent problem in Ohio. Ohioans deserve to have their rights enumerated in a way that is not subject to the whims of a political party’s majority in state government. I encourage Secretary Husted to take this ruling as a mandate to uphold Ohioans sacred right to vote.” –State Rep. and Ohio Legislative Black Caucus President Alicia Reece (D-Cincinnati)

“As we have been telling Secretary Husted for the past two years, the legislature has not succeeded in any of its many attempts to cut off the last three days of early voting—it ends on Monday before the election. End of story. I am happy that a court has once again protected the rights of Ohio’s voters, and I urge Secretary Husted to accept this ruling and move on.” –State Rep. Kathleen Clyde (D-Kent)