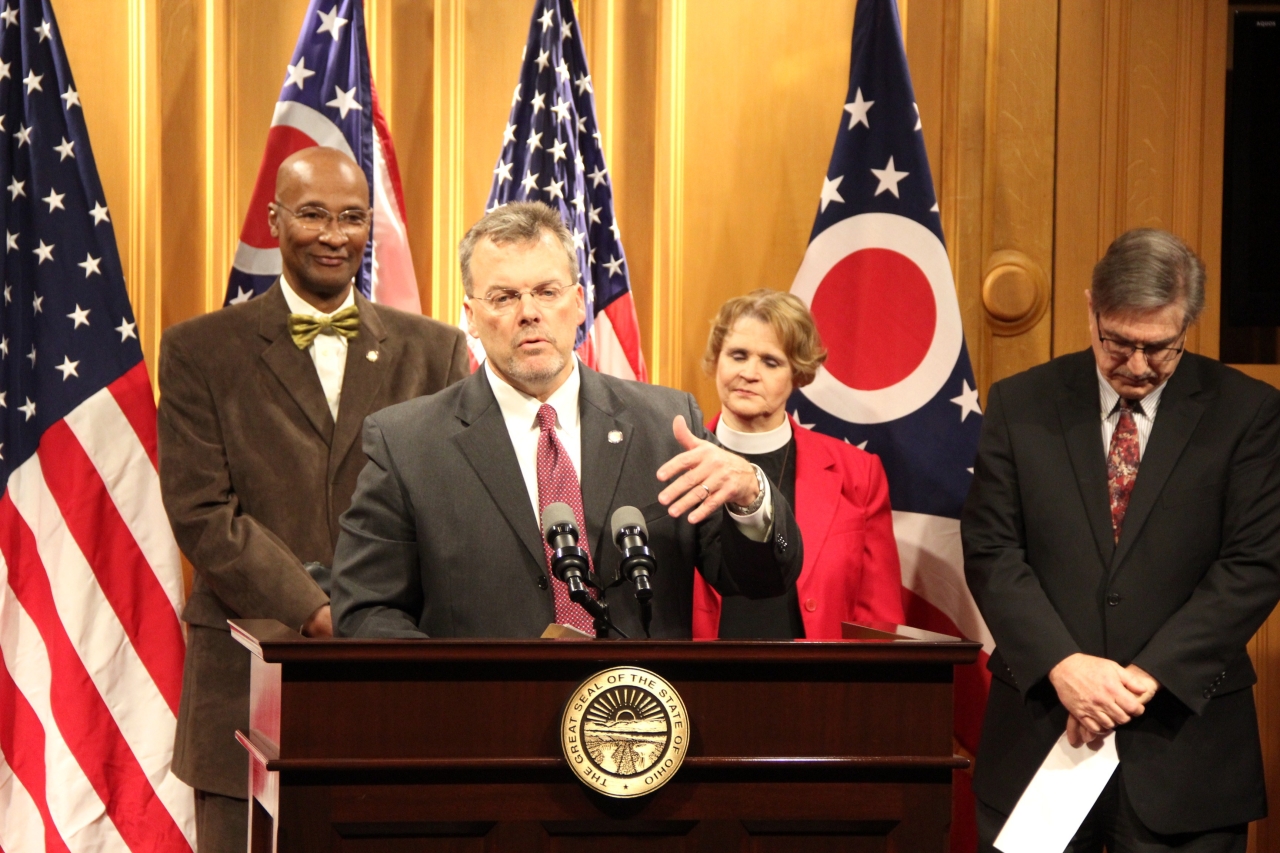 At a press conference at the Ohio Statehouse, State Representatives Tim Derickson (R-Oxford) and Bill Patmon (D-Cleveland) today discussed legislation to prevent any laws that substantially burden a person’s free exercise of religion.

The Ohio Religious Freedom Restoration Act (RFRA) strives to ensure that Ohio citizens have the ability to freely worship and exercise their religious liberties, an effort that has already been undertaken at the federal level to protect the First Amendment.

“For most Ohioans, faith and worship play a vital role in their lives and provide a sense of hope and community,” said Rep. Derickson. “We are privileged as Americans to have a guaranteed right to free speech and free exercise of religion. It is important that religious and political leaders work together to defend religious liberties on behalf of our citizens of all faiths, and implementing a Religious Freedom Restoration Act in Ohio will help to accomplish this goal.”

“This legislation will help reassert the foundation upon which this country was founded and has grown and prospered on—freedom of religion and the practice of it,” said Rep. Patmon.

The Ohio RFRA largely resembles the federal RFRA, which was signed into law by President Bill Clinton in 1993. It restored the requirement of “strict scrutiny” application in religious freedom cases, which ensured that the government adequately justify burdens on religious exercise imposed by laws neutral toward religion and that if limited religious rights is indeed justified, the court must take the least restrictive means possible to limit those rights.

However, in City of Boerne v. Flores (1997), the Supreme Court ruled that Congress lacked the authority to mandate how state laws should be interpreted. Therefore, the federal RFRA currently only applies to the interpretation of federal statutes, not to state laws. The Supreme Court ruling has encouraged states to implement their own RFRAs to uphold and protect citizens’ First Amendment rights.

“While Congress and the President had intended RFRA to protect all Americans, the U.S. Supreme Court ruled in 1997 that Congress lacks the power to apply this federal law to actions by state or local governments,” said Rep. Derickson. “I hope to see Ohio join the 18 other states that have already passed their own Religious Freedom Restoration Acts and ensured that religious freedoms are afforded to their citizens for generations to come.”

The proposed Ohio RFRA has received the support of the Ohio Catholic Conference, Agudath Israel of America, the Ohio Council of Churches, the Family Research Council, the Liberty Foundation, Citizens for Community Values, Citizen Link, and the Institute for Principled Policy.

The press conference can be viewed at http://www.OhioChannel.org/MediaLibrary/Media.aspx?fileId=141426