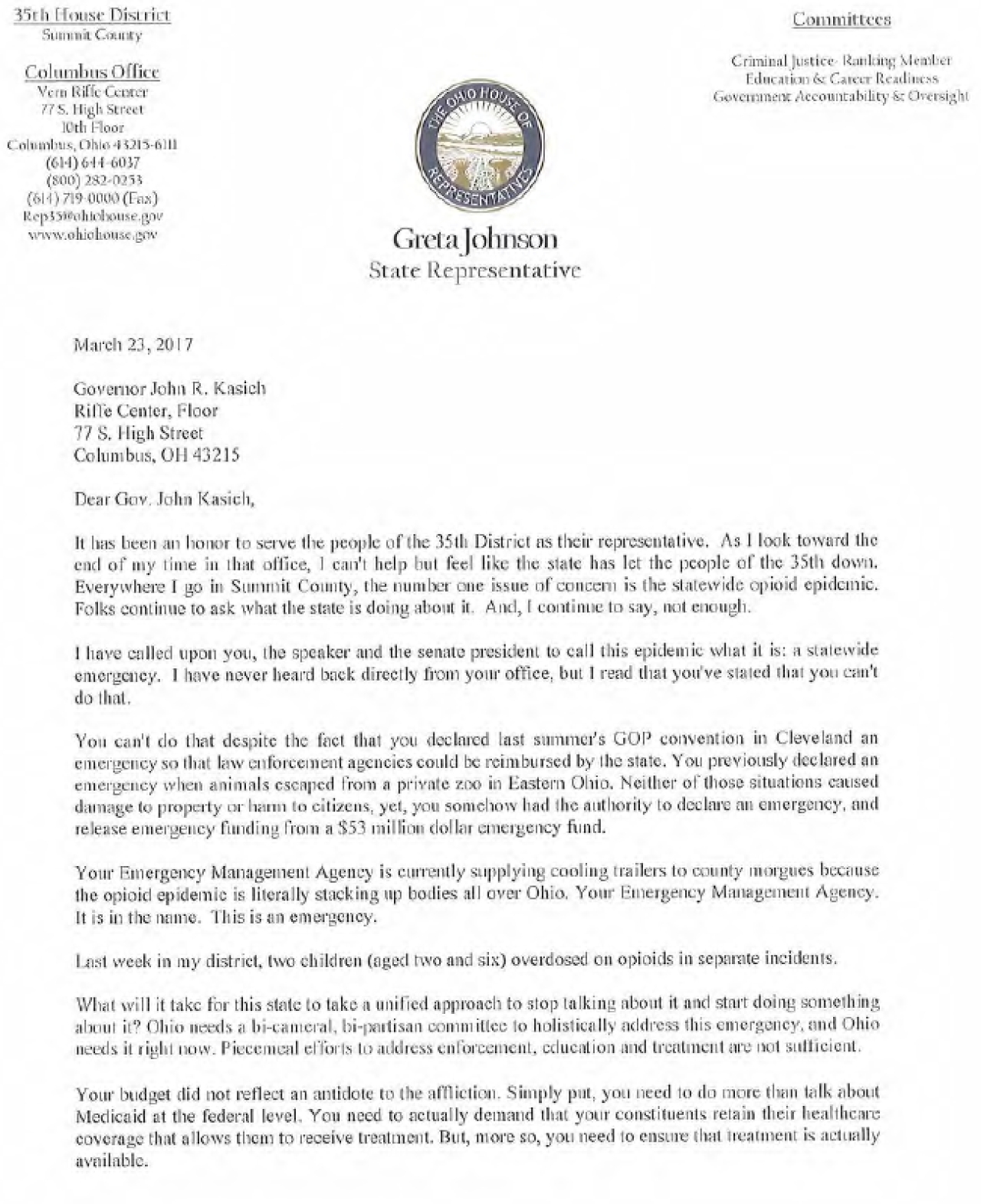 Johnson has called on the governor numerous times in the last year to declare the Buckeye State’s opioid crisis a statewide emergency, freeing up emergency funding for first responders, treatment and law enforcement.

The full text of the letter is below and attached:

It has been an honor to serve the people of the 35th District as their representative.  As I look toward the end of my time in that office, I can't help but feel like the state has let the people of the 35th down.  Everywhere I go in Summit County, the number one issue of concern is the statewide opioid epidemic. Folks continue to ask what the state is doing about it.  And, I continue to say, not enough.

I have called upon you, the speaker and the senate president to call this epidemic what it is: a statewide emergency.  I have never heard back directly from your office, but I read that you've stated that you can't do that.

You can't do that despite the fact that you declared last summer's GOP convention in Cleveland an emergency so that law enforcement agencies could be reimbursed by the state. You previously declared an emergency when animals escaped from a private zoo in Eastern Ohio. Neither of those situations caused damage to property or harm to citizens, yet, you somehow had the authority to declare an emergency, and release emergency funding from a $53-million-dollar emergency fund.

What will it take for this state to take a unified approach to stop talking about it and start doing something about it? Ohio needs a bi-cameral, bi-partisan committee to holistically address this emergency, and Ohio needs it right now. Piecemeal efforts to address enforcement, education and treatment are not sufficient.

Your budget did not reflect an antidote to the affliction. Simply put, you need to do more than talk about Medicaid at the federal level. You need to actually demand that your constituents retain their healthcare coverage that allows them to receive treatment. But, more so, you need to ensure that treatment is actually available.

Unfortunately, treatment won't come without a price tag. We live in the most advanced capitalist society in the world after all. Everything costs something, and doing more costs more. But your budget flat-funds efforts to beat back this statewide epidemic of emergency proportions.

Beds need to be opened, professionals need to be trained, police departments need to have their local government funding restored and like an addicted person trying to recover, you need to call this epidemic what it is: a statewide emergency.

But instead of calling this what it is and providing additional resources, you're ironically shoveling local communities and families the same rhetoric coming out of Washington - 'it's a local responsibility, the state can only do so much.'

You recently wrote GOP congressional leaders about your party's proposed efforts to essentially gut Medicaid health insurance, writing that Trumpcare "provides almost no new flexibility for states, does not ensure the resources necessary to make sure no one is left out, and shifts significant new costs to states."

Indeed, you're exploring new altitudes of hypocrisy when you're quick to pen a letter decrying federal cuts, but gravely slow to reverse state cuts.

You will be happy to know that I am in a way taking your advice. After your huffing and puffing about local communities having the real responsibility to take on the heroin crisis, I am returning to public service at the local level with the belief and knowledge that there really are elected officials who are committed to turning words into action and meeting citizens of this state where they are in life - in need of safety, in need of security, in need of opportunity, in need of hope, and sometimes, in need of care.

While Ohio leads the nation in deaths from opioids and in deaths from heroin, I believe you have a moral obligation tell Ohioans and the rest of the country that we are in a state of emergency, and that addiction is not a moral issue.

And, while addiction is not a moral issue, choosing to do nothing about people dying from addiction is.

Representative to the 35th House District