State Rep. Thomas West (D-Canton) today announced an event on Monday, October 14, at 12:00 PM at the Canton Regional Chamber of Commerce to promote $300,000 in state budget funding for the Stark County Minority Business Association (SCMBA) and the Chamber.

“The state report card grading system is not fair and does not adequately reflect the hard work of our teachers, students and school administrators. The way we evaluate our school districts, coupled with how we respond to districts that are struggling, must be reformed. As our children come to school with more trauma and our districts struggle with limited resources, teachers face tremendous challenges to educating students. We need to restore local control and provide additional support to schools so all of our children have a chance to live the American Dream.” 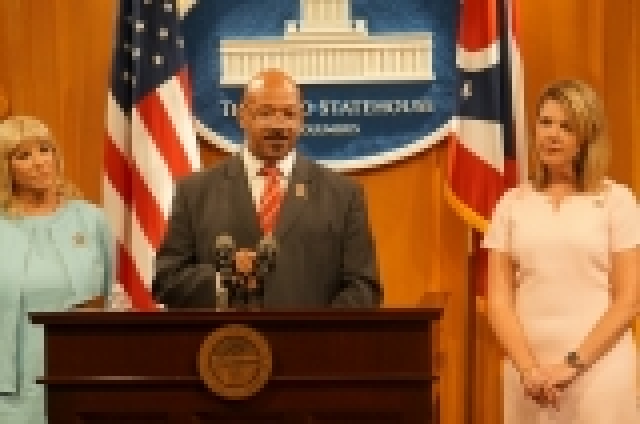 House lawmakers introduce legislation to encourage more "Women on Board"

“We know from research that having more diverse boards makes a business stronger,” said Rep. West. “Passing this resolution shows the state is taking the first step in recognizing that increasing gender diversity and equity in corporate leadership would make Ohio a better place to live, work and retire with security. I am proud to be a joint sponsor of this important resolution.”

Reps. West, Carruthers to hold press conference to encourage more "Women on Board"

State Reps. Thomas West (D-Canton) and Sara Carruthers (R-Hamilton) will hold a press conference on Tuesday, September 10 at 10:00 a.m. in the Harding Senate Press Room to discuss a concurrent resolution they are introducing to encourage equitable and diverse gender representation on the boards and in senior management positions of Ohio companies.

“In 2016, women represented 44.3 percent of the labor force in Ohio, but only 20.5 percent of board seats for Fortune 1000 companies headquartered in Ohio,” said Rep. West. “This resolution would make a statement that our state is serious about narrowing that gap and finally leveling the playing field for women in the workforce.”

State Rep. Thomas West (D-Canton) today issued a statement on the state legislature’s duty to work together to address senseless gun violence and keep all Ohioans safe and secure in the wake of a mass shooting in Dayton, Ohio this past weekend: 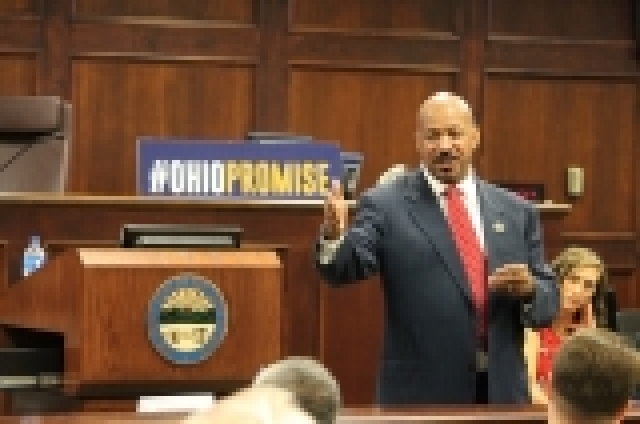 State Rep. Thomas West (D-Canton) today held a community town hall as part of the Ohio Promise Town Hall Tour, a statewide legislative town hall series hosted by House Democratic members. The purpose of the tour is to hear from constituents in their districts about their most pressing concerns, answer questions, and discuss the state budget, bipartisan priorities and a number of recent Democratic-led, legislative wins for working people and families.

“I voted yes on the budget because of important measures that will improve the lives of Ohioans across our state, such as language from my bill to increase price transparency at the pharmacy counter and provisions that increase funding to address some of our most serious social ills,” said Rep. West. “While this budget could have been stronger for working families, I believe it puts us on the right path forward to keeping our promise to Ohio’s families that they have the support and tools to thrive, not just survive.”

State Rep. Thomas West (D-Canton) today announced the introduction of House Bill (HB) 277, bipartisan legislation with Rep. Phil Plummer (R-Dayton) to implement mandatory recordings of suspect interrogations statewide for some of the most serious crimes, such as homicide and sexual assault cases. The two lawmakers unveiled their proposal at a press conference this morning with supporters from the Ohio Public Defenders office and the Ohio Innocence Project.

“The more transparency and accountability we can provide, the more trust Ohioans will have in our judicial and criminal justice systems,” said Rep. West. “This bill is just one piece of a bigger puzzle in ensuring all Ohioans are treated fairly, and feel safe and secure at home.”

State Rep. Thomas E. West (D-Canton) this week announced the passage of House Bill (HB) 12, his bipartisan legislation with Rep. Don Manning (R-New Middletown) to create the Ohio Children’s Behavioral Health Network. The network would bring together a diverse group of experts to develop evidence- and outcome-based solutions to improve the mental health of children and young adults across Ohio, with a special focus on prevention.