State Reps. Michael Sheehy (D-Oregon) and John Patterson (D-Jefferson) today urged the Ohio Environmental Protection Agency (EPA) to continue working to establish state standards for safe levels of microcystin in Ohio’s public water systems, a step that would be required with the passage of the Lake Erie lawmakers’ legislation—House Bill 625.

A state of emergency has been declared in Lucas and Wood Counties after samples of water from an East Toledo facility containing microcystin – a harmful liver toxin released by the algal blooms plaguing the Western Lake Erie Basin - were found to exceed the level allowable for human consumption. The algal blooms are thought to be a result of high levels of phosphorus found in run-off from cities and farms nears the Maumee River watershed.

State Representative Mike Sheehy (D-Oregon), who is a member of the House Agriculture Committee and an outspoken critic of Senate Bill 150, has been calling for tougher regulations on phosphorus polluters since he took office more than a year ago.

“I have been asking my colleagues to support my efforts to reduce run-off and prevent these severe algal blooms,” said Rep. Sheehy. He went on to say, “I even drafted an amendment to Senate Bill 150 which would ban spreading manure on frozen ground, limiting the manure run-off into the Maumee River, but it never made it to the floor of the House. I hope my colleagues and the administration will work with me to seriously re-examine the issue of phosphorus loading in Lake Erie.”

Forced Closing of Capital Care Network Based on Politics, Not Medicine, Lawmaker says

The Ohio Health Department (ODH) on Wednesday refused to renew the health care facility license of Toledo’s last abortion clinic, Capital Care Network. The decision effectively closes the facility and cuts off medical care to thousands of Northwest Ohio women who will now have to travel out of state or over two hours to another major Ohio city for services. 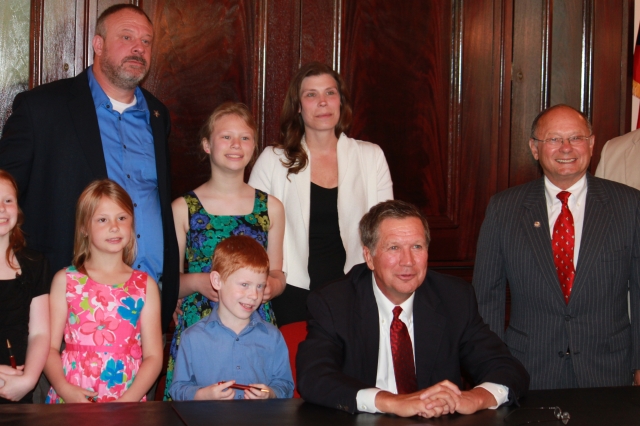 On Thursday, House Bill 399, legislation which designates the first Friday in May as Prescription Drug Abuse Awareness Education Day, was signed into law. The bipartisan proposal was jointly-sponsored by State Representatives Mike Sheehy (D-Oregon) and Robert Sprague (R-Findlay). Inspired by Kyle and April Schalow of Holland, who founded the RX Memorial Foundation inAugust of 2012, the day will help bring awareness to the dangers of prescription drug abuse.