“Innovative research projects such as this are instrumental in helping Ohio remain a competitive force within the manufacturing industry,” said Sheehy. “I am pleased that the state is investing in projects that will help expand opportunities for local manufacturing businesses and grow the regional economy.”

“In designating these memorial highways I hope to honor these brave men who served in our armed forces and gave the ultimate sacrifice to protect our freedoms,” said Sheehy. “I am inspired by their heroic service, and I hope that these memorial signs will inspire others as well.” 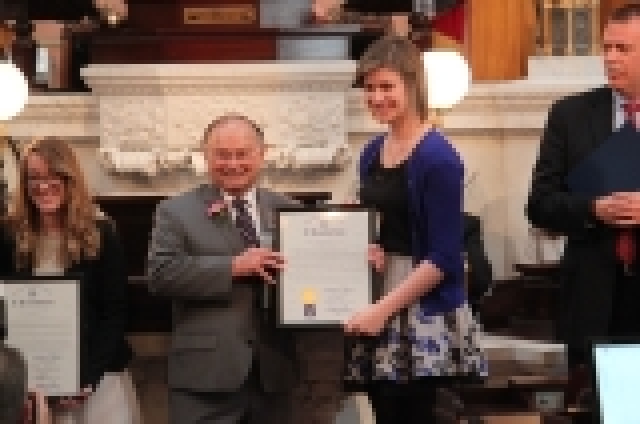 “With over 40 years of experience in the rail industry, I can affirm the absolute necessity of requiring a two-person crew on all freight trains that run through Ohio,” said Sheehy. “Ensuring the safety of both our freight operators and our communities should be a top priority.”

“Last year, Governor Kasich failed to mention the ongoing water quality challenges faced by communities in Northwest Ohio,” said Sheehy. “The work accomplished with Senate Bill 1 to address these issues was a step in the right direction, but the state must take additional and immediate action to protect the drinking water of millions of Ohioans. I urge Gov. Kasich to lay out his plan tomorrow to protect Lake Erie and the Ohioans who depend upon it. We cannot afford to risk another water crisis.”

State Reps. Michael Sheehy (D-Oregon) and Dan Ramos (D-Lorain) this week introduced a resolution calling for the reinstatement of the Glass-Steagall Act, the core provisions of the federal Banking Act of 1933, to improve transparency and stability in the financial sector.

“I believe we must reinstate commonsense regulatory reforms that were originally put in place to protect working families from economic catastrophe,” said Sheehy. “We have seen the devastation that occurs when the incentive for banks to take risks is too high. Restoring the Glass-Steagall provisions will help prevent another Great Recession from undermining Ohio families and businesses.”