“HB 228 is based on fear and not facts,” said Smith. “Speaker Smith should not have ended debate early when other representatives, myself included, were waiting to add to the debate on this important issue.”

“The school district report cards are not just confusing and inaccurate, they are often times just plain wrong,” said Smith. “That is why there is bipartisan support to end the state takeover of local schools that relies on such a faulty measure.”

State Rep. Kent Smith (D-Euclid) today announced his election to represent Ohio on the binational, nonpartisan Great Lakes-St. Lawrence Legislative Caucus (GLLC), a group that provides a forum for the regional exchange of ideas and information on key issues that impact the Great Lakes and St. Lawrence River. At its annual meeting on September 22nd, the GLLC unanimously adopted a resolution introduced by Reps. Smith and John Rogers (D-Mentor-on-the-Lake) introduced in the Ohio Legislature to support federal funding for the United States Army Corps of Engineers in its efforts to stop Asian carp from invading the Great Lakes. The legislation has only received one committee hearing in the Ohio House. 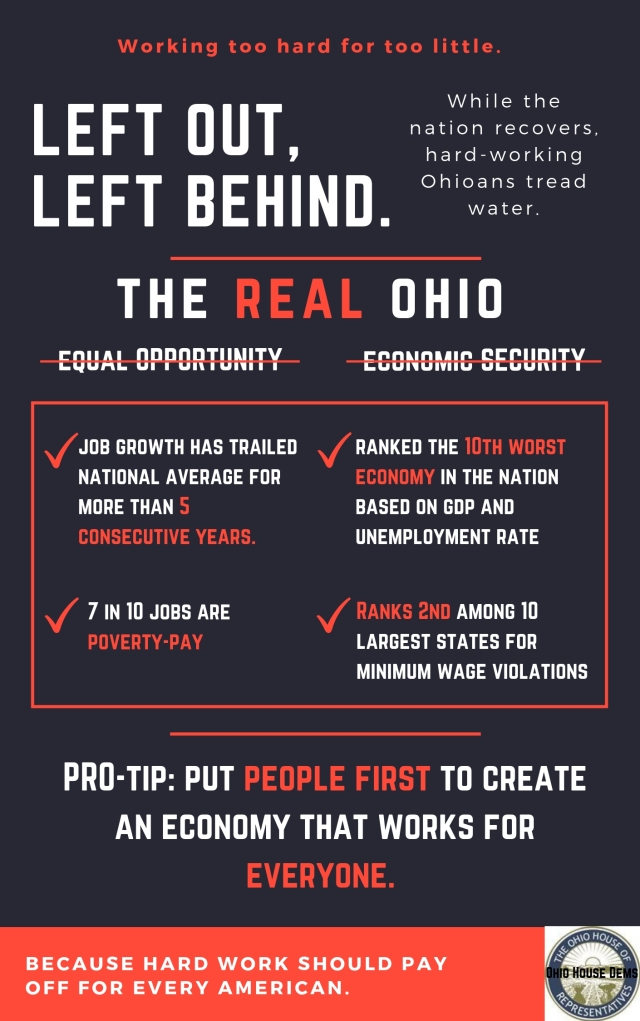 “Today's release of the state report card is further evidence that the biggest hindrance to student performance in Ohio's public schools is not the district leadership of East Cleveland but the politicians of Columbus who take campaign contributions from the charter school industry with one hand as they give public school dollars to charter school operators with the other hand,” said Smith, a member of the House Education Committee.

East Cleveland Schools have lost over $5 million to failing, for-profit charter schools like ECOT while the state has cut the schools by millions of dollars in previous state budgets.

The district is also considered to be the poorest community in the state and the fourth poorest in the nation, with 100 percent of students being considered economically disadvantaged according to ODE data.

“In spite of these substantial challenges East Cleveland City Schools have made tremendous progress, due in part to the extremely talented core of teachers, most of whom have a master’s degree and average 15 years of classroom experience,” said Smith.

The first half of this week (July 16-18), State Rep. Kent Smith (D-Euclid) participated in the #LiveTheWage or #$17ADay Challenge. In September 2015, 18 members of the Florida Legislature attempted to live five days on $17 a day.  In Ohio, workers earning minimum wage have $17 a day on which to live after paying rent and taxes if their rent is $674. Rep. Smith is the sponsor of House Bill 86 with Rep. Hearcel Craig (D-Columbus), which would raise the state's current minimum wage from $8.30 per hour to $10.10 per hour.

Three years after it was exposed that Gov. John Kasich’s handpicked charter-czar David Hansen, husband of Kasich’s chief of staff, was illegally changing charter school grades to allow failing charter schools to draw down on more taxpayer funding, little has happened at the Republican-controlled Statehouse to crack down, once and for all, on Ohio’s largely unregulated charter school industry.

Just recently, it came to light that the now-defunct ECOT, the largest online charter that bankrolled numerous GOP campaigns, was using tax dollars to pay off students for attending graduation ceremonies and taking required statewide tests.

“As this scandal unfolds and more problems come to light, the political will at the Statehouse to make substantive reforms is overshadowed by the failure to act during the last three years,” said Rep. Kent Smith (D-Euclid), a member of the House Education Committee. “Operating in a system where charter school operators bankroll the campaigns of elected officials tasked with holding them accountable has stalled any meaningful reform and opened to door to more corruption.”

Nearly three years after the passing of House Bill 70 in the 131st General Assembly, which granted the state-appointed Academic Distress Commission (ADC) the ability to takeover failing school districts, the legitimacy of the distress commission, has come into question with a new state review of the Youngstown City School District.

According to the spring review by the Ohio Department of Education, the district’s ADC is failing key state education standards, from fiscal management to student support and curriculum delivery. The state’s review also says the Youngstown ADC doesn’t have a comprehensive professional development plan, lacks a district-wide communication plan, and is missing “instructional supports” for students with disabilities. The report calls for more shared accountability among building administrators too.

“Mounting evidence is bringing together lawmakers from both sides of the aisle to freeze state takeovers of our local schools,” said Smith. “We’re close to including language to that effect in a soon-to-pass bill and, less interparty political pressure or closed door deals, most Republican lawmakers seem ready to join us in taking a hard look at what’s really going on in education.”

State Reps. Kent Smith (D-Euclid) and Teresa Fedor (D-Toledo) have a pending amendment to Senate Bill 216 to put a three-year moratorium on the state takeover of local schools, to give the legislature an opportunity to develop alternatives for failing school districts.