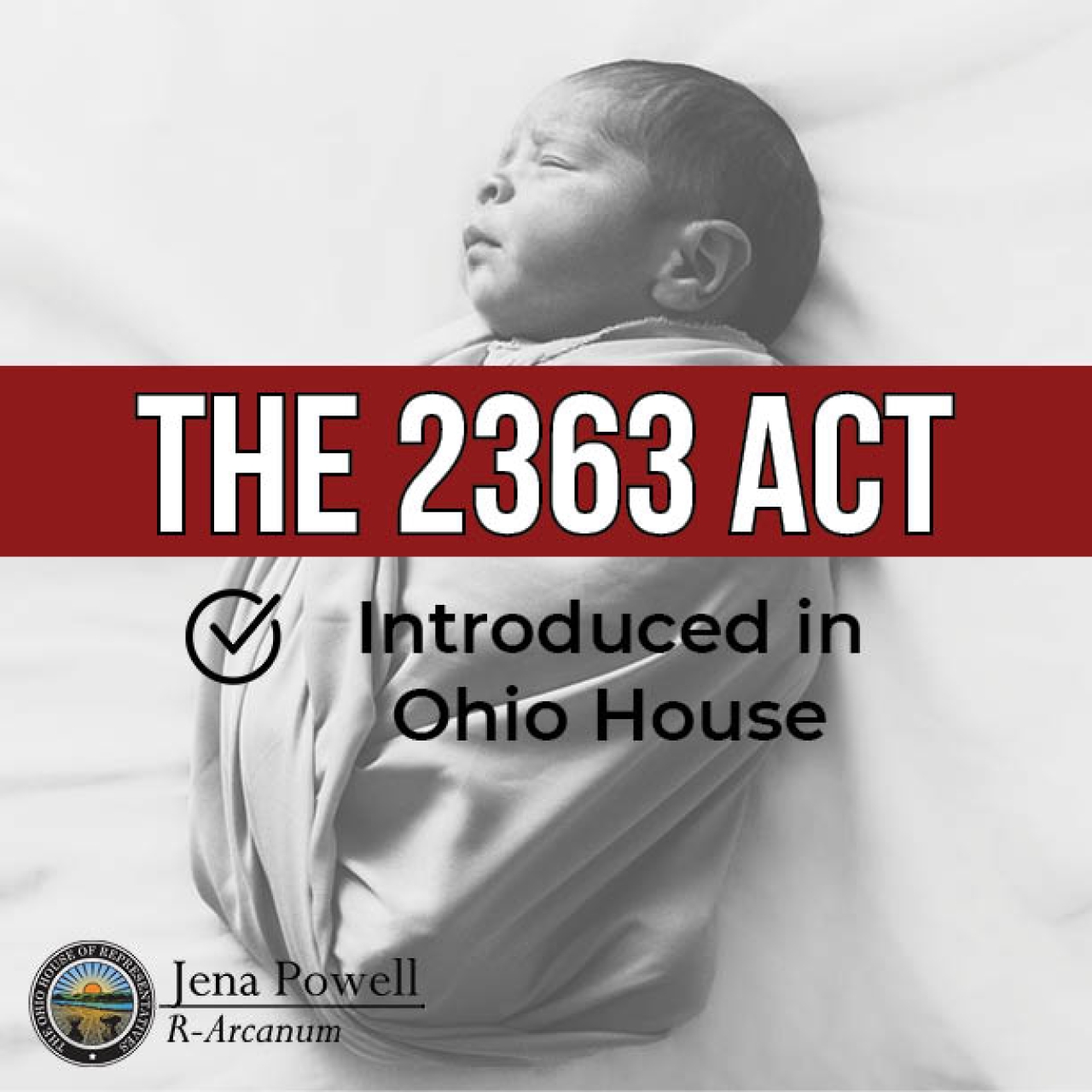 COLUMBUS – State Representatives Jena Powell (R-Arcanum) and Thomas Hall (R-Madison Twp.) today filed a new bill to protect all preborn children. House Bill 480 is called The 2363 Act, in honor of the 2,363 children who are lost every day in our country due to the violence of abortion.

“The sanctity of human life, born and preborn, must be preserved in Ohio,” said Rep. Powell. “The 2363 Act is about protecting our fundamental, constitutional right to be born and live. Abortion kills children, scars families, and harms women. We can and must do better.”

“Abortion is our nation’s leading cause of death, killing more people than heart disease, cancer, or COVID-19,” said Lila Rose, Founder & President of LiveAction. “The science is crystal clear – human life begins at the moment of fertilization. The 2363 Act would write into law the truth that every single preborn child deserves protection and no child should be discriminated against based on race, gender, medical diagnosis, or age. The 2363 Act is the beginning of the end of legally sanctioned abortions in America. I am grateful for Representative Powell and Representative Hall’s leadership to protect children and inspire leaders across the country to go from 2,363 children lost to abortion each day to 0.”

The 2363 Act has already received support from a number of organizations throughout the state.

“The Right to Life Action Coalition and all of its member organizations are very happy at the introduction of this ground-breaking legislation,” said Linda Theis, President of the Right to Life Action Coalition. “This will be a major step towards ending abortion in Ohio.  We congratulate the bill sponsors on their work and look forward to working with them on this historic piece of legislation.”

Rep. Powell also noted that “since the constitutional fiction of Roe v. Wade has prevented communities from protecting our youngest children for the past fifty years, a new and bold approach is needed. The 2363 Act utilizes the enforcement mechanism from the successful Texas Heartbeat Act, which has been upheld by the Fifth Circuit Court of Appeals.”

“Since the Court has blocked states from exercising their basic duty to protect the constitutional right to life, the people of the state of Ohio have the responsibility to take action,” said Nilani Jawahar, Legislative Liaison for the Center for Christian Virtue. “CCV is proud to support The 2363 Act and affirm that every child deserves a chance at life.”

“Joe Biden has stated he wants abortion in every zip code in America. Hence, citizens across the country are acting by preventing abortion from being committed in their states. Ohio is once again taking the lead to protect children, and more states are joining this movement every week,” said Mark Harrington, President and Founder of Created Equal, a Columbus based advocacy organization.

“We are grateful for Representative Powell’s pro-life leadership in the Ohio House of Representatives and her initiative to establish the House pro-life caucus,” said Mary Parker, Director of Legislative Affairs at Ohio Right to Life. “We look forward to working with her on pro-life initiatives so that all unborn human life will be protected in the great state of Ohio.”

“Representative Powell and I, as the two youngest serving members in the Ohio House, are part of the generation that will end abortion in Ohio and across America,” said Rep. Hall. “It is vital that we come together at this pivotal moment to lead in defense of the most vulnerable. I’m looking forward to working with my colleagues to protect the lives of the preborn in Ohio.”

Rep. Powell is also the founder of the Ohio House Pro-life Caucus, which focuses on promoting life, ending abortion, and strengthening families in Ohio. Rep. Hall, along with 30 other Republican legislators, is a member of the caucus.