“I am truly honored to be recognized by a group that does so much to promote the safety and well-being of our young people,” said Sykes. “I am eager to continue working at the state level to combat infant mortality while promoting commonsense safety initiatives like bike helmet use, efforts that will help protect some of our most vulnerable Ohioans.” 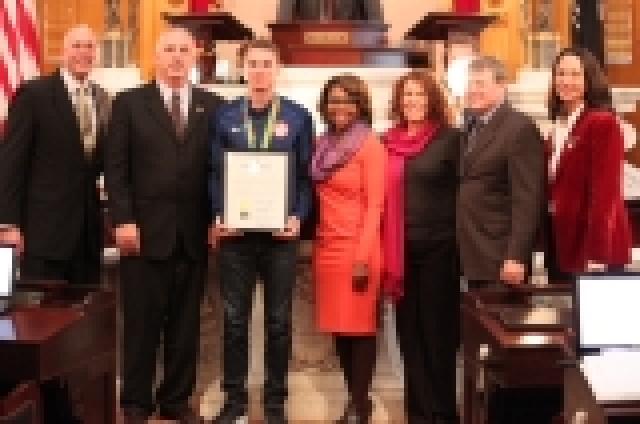 State Rep. Emilia Sykes (D-Akron) today offered a House Resolution honoring University of Akron student Clayton Murphy for being awarded the bronze medal in the 800-meter dash at the 2016 Summer Olympics in Rio. Murphy, a senior at the University of Akron, will be graduating in May with a degree in Corporate Finance.

“I am thrilled to be honoring Clayton Murphy on the House floor today. It is often said that the 34th House District is the birthplace of champions, and Mr. Murphy is no exception,” said Sykes. “Also to be credited is his coach, Lee LaBadie, and the track and field coaching staff at the University.”

Eleventh-hour lawmaking brought the strictest abortion ban in the nation to Gov. John Kasich’s desk this evening, for his signature into law. With U.S. Senate inaction giving way to a pending U.S. Supreme Court justice appointment from President-elect Donald Trump, Ohio Republicans appear to be counting on a new federal bench to re-litigate the constitutionality of their attacks on women’s health care. But Roe v. Wade is settled law upheld most recently by the Whole Women’s Health decision which overturned undue burdens on women’s access to abortion.

The unprecedented six-week abortion ban was amended into House Bill 493, legislation that strengthens Ohio’s child abuse reporting system. The last-minute amendment comes as the legislature closes out the 131st General Assembly on Thursday.

“If the legislature is serious about supporting life, how about supporting babies and families in a state with one of the worst infant mortality rates in the nation? How about finally adequately funding our children’s education? For all the talk from some lawmakers about the sanctity and value of life, that value seems to end once the child is outside the womb. This extreme, unconstitutional legislation places partisan politics above the health and well-being of Ohio women and their families.” –Rep. Emilia Strong Sykes (D-Akron)

The Ohio House today put the final stamp of approval on opioid omnibus legislation after months of inaction during the rapidly growing opioid addiction crisis. Ohio was recently identified as the national leader in opioid and heroin overdose deaths by the Henry J. Kaiser Family Foundation’s analysis of U.S. Center for Disease Control and Prevention Data.

“There is a clear disconnect between bills being passed in Columbus, and the lives that are being lost in places across the state like Akron, Portsmouth and Cincinnati,” said State Rep. Emilia Sykes (D-Akron). “The state can and must do more to address this statewide emergency – it is literally a matter of life or death.”

The legislation, Senate Bill 319, passed after a trio of amendments from Democratic lawmakers to provide much-needed emergency funding and allow immediate implementation of the bill were rejected by GOP lawmakers. 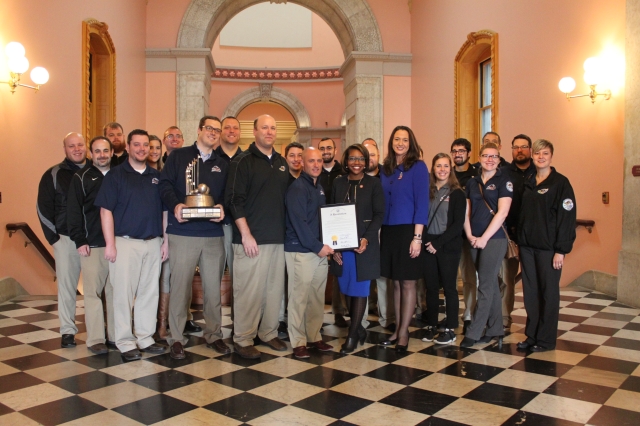 “Once again, the RubberDucks continue the 34th House District’s longstanding tradition of being the birthplace of champions. I am so immensely proud of this team’s unyielding dedication that has earned them this title for the fifth time in 12 years,” said Sykes. “The RubberDucks, along with owner Ken Babby, are an invaluable treasure of the Akron community, and it has been my honor to recognize them at the Statehouse today.”

State Rep. Emilia Strong Sykes today expressed concern that a House-passed measure to expand the offense of involuntary manslaughter conflicts with recently enacted laws and will likely have an unintended negative impact, especially on minority communities in Ohio.

House Bill (HB) 270, passed by the House this afternoon, would expand the offense of involuntary manslaughter to include causing or contributing to another’s death by selling, dispensing, or administering a controlled substance.

“We saw what happened in the 1980s and early ‘90s when states took a knee-jerk approach to combatting drug epidemics by being so-called ‘tough on crime’,” said Sykes. “While this bill may have good intentions, I believe it will likely exacerbate racial inequities in our criminal justice system and put Ohioans struggling with substance abuse behind bars instead of getting them the treatment they need.”

State Rep. Emilia Sykes (D-Akron) today participated in the 2016 Impact Ohio – Post Election Conference Panel to discuss the ramifications of the general election on Medicaid and health and human services policy in the state.

“Public health is one of my top priorities as a legislator, and I relish the opportunity to speak publicly about the healthcare challenges Ohioans face— particularly, access to care challenges for women and minorities, as well as the alarmingly high rate of infant mortality,” said Sykes. “This election will undoubtedly have a tremendous impact on the direction of health policy at both the National and state level. I am grateful to lend my voice to the discussion and help ensure that we do not let the most vulnerable Ohioans slip through the cracks."

State Rep. Emilia Sykes (D-Akron) today announced the release of $12 million in state funds for the Ohio Department of Transportation (ODOT) to replace the Major Bridge on State Route 8 in Summit County. The funding was approved at today’s meeting by the Controlling Board, a panel tasked with oversight of state spending.

“Our state’s roads and bridges provide the foundation for a strong economy that keeps goods, services and people moving safely and efficiently every day,” said Sykes. “That makes it especially important for the state to maintain an active partnership with local communities to modernize outdated and unsafe infrastructure. I am pleased that the state has made this commitment to provide the much-needed necessary resources to improve a critical part of our community.”

State Rep. Emilia Sykes (D-Akron) recently recognized the 10 graduates of the first ever Drive for Success program in Akron. Established jointly by the Ohio Department of Transportation (ODOT) and the Akron Summit County Action Agency (ASCA), Drive for Success helps provide individuals with the opportunity to attain career readiness skills in the construction industry.

“The Drive for Success program is a marvelous example of how effective partnerships between the state and local communities can help expand access to economic opportunities for our residents,” said Sykes. “By providing these graduates with the training they need to enter and find success in the workforce, we are investing in their future as well as the future growth of our regional economy.” 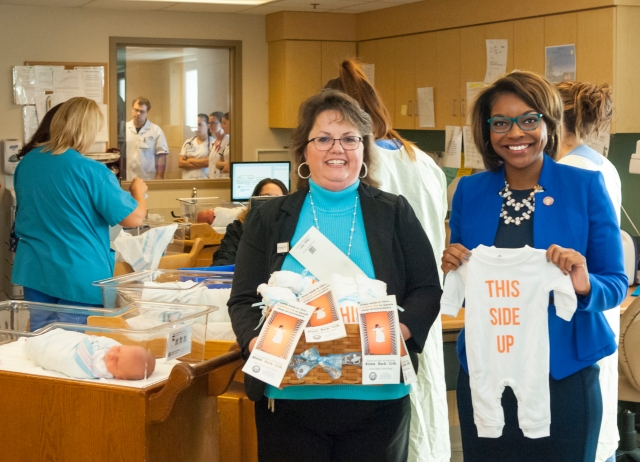 State Rep. Emilia Sykes (D-Akron) Tuesday kicked off Safe Sleep Awareness Month with visits to Cleveland Clinic Akron General and Summa Health Equity Center to drop off onesies and discuss safe sleeping practices for babies. In collaboration with Akron Metropolitan Housing Authority (AMHA Early) Childhood Initiative and ACCESS Shelter & Housing, a local organization dedicated to addressing the plight of women and children in the Akron community, Sykes is gathering donated onesies for  families in need and spreading awareness about safe sleeping practices for Ohio babies. The onesies, donated by the Ohio Hospital Association, have “This Side Up” printed across the front—a reminder to parents that doctors recommend all infants sleep on their backs to reduce Sudden Infant Death Syndrome (SIDS).