“St. Bernard Soap Company’s long standing professional excellence deem them more than worthy of this opportunity to grow,” said Kelly. “Successful and unique businesses are an essential asset in the Cincinnati region, and it is critical to recognize those that are making a considerable mark in shaping the community’s economic future. I’m excited to see what’s next for St. Bernard Soap Company and look forward to more high quality jobs coming to my district.”

“Taxpayers expect us to work together to increase opportunity and create jobs with wages and benefits that can sustain a family. These anti-worker, anti-family restrictions will do the exact opposite. Dangerous, divisive bills like these will only push our economy further out of balance and make people more poor and less safe on the job.”

The restrictions, introduced by state Rep. John Becker (R- Union Township), range from Right-to-Work-is-Wrong for public and private sector workers to outlawing project labor agreements, or terms and conditions of construction projects that encourage careers in the skilled trades and ensure projects are completed on time and under budget.

Over 2 million Ohio taxpayers overwhelmingly rejected similar attacks on working people in 2011, handing the Republican legislature a 62 to 38-percent defeat at the ballot box with a citizen-led repeal of Senate Bill 5.

We know that emergency service personnel - and military service members - make important contributions to our communities every day. Whether a crime in progress, a house on fire, an injury to a loved one, or the ongoing protection of our state and nation, these individuals and their families make great sacrifice to serve.

State Reps. Stephanie Howse (D-Cleveland) and Brigid Kelly (D-Cincinnati) today announced the introduction of Gender Pay Disparity Task Force legislation, a bill that seeks to analyze the extent of gender pay discrimination and report to the General Assembly legislative recommendations on how to close the gap. 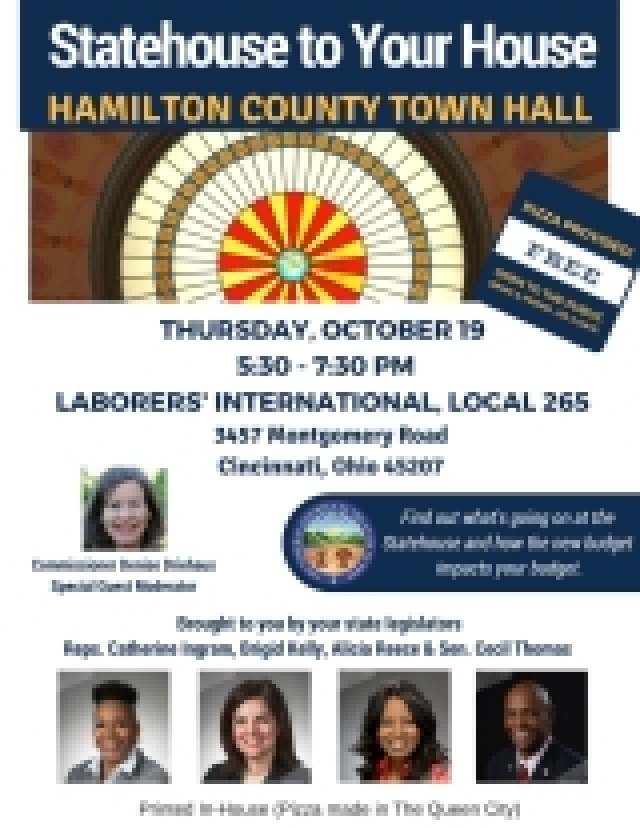 Rep. Kelly (D-Cincinnati) and other Democratic Cincinnati lawmakers held a public town hall in Cincinatti to discuss the recently-enacted state budget and other legislative issues that impact taxpayers.

State Rep. Brigid Kelly (D-Cincinnati) and supporters of House Bill 61, a bipartisan bill to exempt feminine hygiene products from the state sales tax, were available to press for questions and comments immediately following testimony on the bill in the House Ways and Means Committee. The bill’s second hearing comes less than a month after the Ohio House passed similar legislation exempting optical aids from the sales tax.

“The sales tax holiday is a great opportunity to help Ohio families as they prepare for the new school year, and for members of our communities to support local workers and local businesses,” said Kelly. “Saving money on important items like clothes and school supplies will make it easier for families to ensure that kids are well prepared for the upcoming school year, while also bringing a revenue boost to local businesses.”

State Rep. Brigid Kelly (D-Cincinnati) today announced she has been named to the Ohio House of Representative’s Task Force on Alzheimer’s and Dementia, a new bipartisan working group that will evaluate policy issues related to Alzheimer’s and similar illnesses affecting Ohio senior citizens.

The task force, which will meet twice a month from August through October of this year, is expected to submit legislative recommendations to the Ohio House for further consideration when the chamber reconvenes this fall.

“I look forward to working with my colleagues on both side of the aisle to find creative policy solutions to the many struggles facing families affected by Alzheimer’s and dementia,” said Kelly. “Cincinnati is taking big steps forward to make our city safer, healthier and more affordable for senior citizens and I value the opportunity to provide partnership at the state level.”

In a political effort to hamstring Ohio House Democratic lawmakers in a pro-gun, anti-gun debate today on the House floor, Republicans brought forward House Bill (HB) 233 for a vote, legislation that allows concealed carry permit holders to knowingly bring guns or deadly weapons into daycares, schools, airports, bars and other restricted spaces, so long as the permit holder leaves when asked to do so. Individuals who refuse to leave or return to the same business while carrying a prohibited weapon within 30 days will be subject to a fourth degree misdemeanor.

“This isn’t just a solution looking for a problem, but it is creating a whole new set of public safety problems by overturning Ohio laws designed to keep us safe and secure,” said House Democratic Leader Fred Strahorn (D-Dayton). “This will trample private property rights of business owners and create confusion in secure locations like airports, police stations, schools and daycares. As a gun owner and strong second amendment supporter, I think Ohioans deserve to feel safe and secure, free from the fear of intimidation or tragedies this bill could create,” added Strahorn.

State Rep. Brigid Kelly (D-Cincinnati) today joined the Fraternal Order of Police (FOP) of Ohio and state Rep. Tom Patton (R-Strongsville) to announce bipartisan legislation to enhance officer safety on Ohio’s roadways by strengthening the state’s “Move Over” law. The legislation would increase the penalty when motorists’ failure to slow down and, if possible, change lanes away from law enforcement and roadside emergency vehicles results in the injury or death of an officer.

“Just as the fearless men and women of Ohio’s police force keep us and our communities safe every day, we must do our part to ensure their safety in the line of duty,” said Kelly. “Strengthening Ohio’s ‘Move Over’ law is one way we can help ensure our officers make it home to their families each night, in addition to making us all safer on Ohio’s roads and highways.”