As workers and retirees from across the nation gathered on the Ohio Statehouse lawn today to speak out for pension protections for hundreds of thousands of retired American workers, Ohio House Democratic lawmakers spoke out in support of American retirees and urged the Ohio legislature to take up legislation, House Concurrent Resolution (HCR) 8, that would urge members of congress to protect coal miner pensions.

State Rep. Brigid Kelly (D-Cincinnati) today announced the passage of House Bill (HB) 386, bipartisan legislation to give Ohio citizens unlimited access and autonomy to the status of their personal credit.

After nearly two months of a Republican-led legislative impasse, the Ohio House is expected to resume legislative activity following today’s narrow, marathon election of new House Speaker Ryan Smith (R-Bidwell). Chaos and dysfunction have plagued the legislature since the abrupt resignation of former Speaker Cliff Rosenberger (R-Clarksville), after he announced he was under FBI inquiry in April. Federal agents have since raided Rosenberger’s home, his state office and storage shed, as rumors of pay-to-play tactics on payday lending reform legislation continue to churn.

“Canceling session today and tomorrow is yet another indicator of the chaos and dysfunction hanging over the Statehouse since the former speaker resigned in disgrace. Republican gridlock means we are not spending time on important issues facing working families like higher pay, better jobs, and affordable healthcare. Taxpayers deserve elected officials who work for them, they deserve answers about what’s happening in Columbus, and they deserve real leadership that puts people before politics.”

Ohio House Assistant Democratic Whip Brigid Kelly (D-Cincinnati) today responded to former Republican House Speaker cliff Rosenberger’s expedited resignation from the Ohio House amid an FBI investigation into events in which he may have been involved. Rosenberger initially announced he would resign May 1, but late Thursday announced he was resigning immediately.

Kelly says the about face amid outside political-party pressure raises new questions about the legislature’s work and the breadth and depth of the federal investigation. Kelly issued the following statement:

“It is no secret that the people’s work in the state legislature has become overshadowed by suspicions of corruption and violations of the public trust since former Speaker Rosenberger announced he could be part of an FBI investigation. We are hopeful his expedited resignation helps us all get back to work on behalf of the taxpayers sooner, but the truth is, it also creates new questions about how the outside influence of political party pressure during an election year may be dictating the terms, conditions and deadlines of the people’s work in the legislature.

“The former speaker was right – allegations of public corruption and breach of the public’s trust is bigger than one person. That is why, even though one person has resigned, we are concerned that the impact and scope of this investigation remains unclear.” 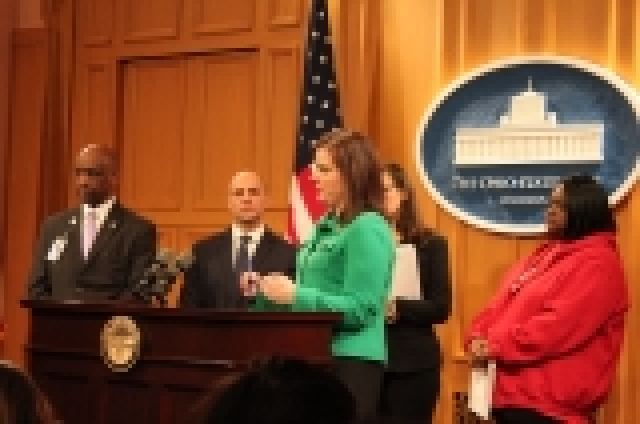 Kelly: Real State of the State shows Ohio losing ground to too many other states

State Rep. Brigid Kelly (D-Cincinnati) and Democratic House members from across the state today issued statements in support of the Working People’s Day of Action planned for Saturday, February 24 at the Ohio Statehouse. The Ohio march comes on the heels of the introduction of six Republican-sponsored constitutional amendments to implement so-called “right to work” legislation and other workplace restrictions in the Buckeye State.

“Instead of revisiting divisive anti-worker policies of the past—policies Ohio voters overwhelmingly rejected—we should focus on commonsense ideas to grow our economy and create good-paying jobs that give working families the opportunity to get ahead and plan for the future,” said state Rep. Brigid Kelly (D-Cincinnati). “By standing up with hardworking men and women, we can build an economy that works for everyone, not just those at the top.”